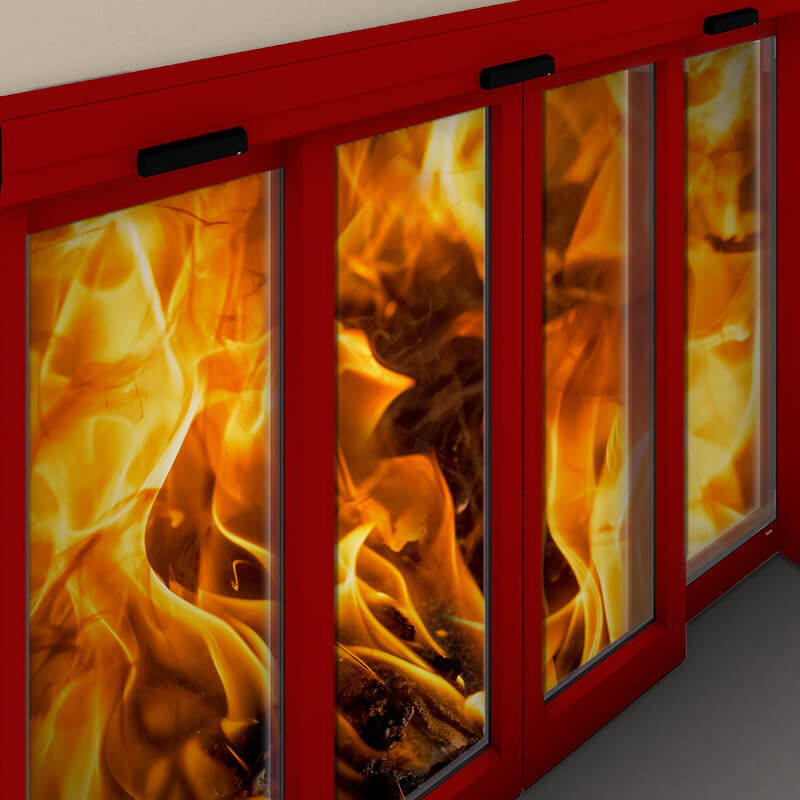 Help prevent the spread of fires in any building! The DIVA RS fire-rated door provides all the comfort of an everyday automatic door, all while contributing to safety in the event of an alarm.

Rated EI2-30, it provides mandatory protection in public-access buildings and workplaces, in compliance with building codes.

Its door leaves can resist flames for 30 minutes in order to contain fires and allow for the safe evacuation of building occupants. The “Metal fire-resistant doors” NF 277 certification compliant with EN 1634-1 and EN 13501-2 standards is proof of its sturdiness.

What are the advantages of the fire-rated door?

AVAILABLE IN THE FOLLOWING COUNTRIES

The door can be installed on masonry or on reinforced partitions. The door is closed by an Intrinsic Mechanical Energy mechanism (CGE System) independent of any electrical source. All its elements (leaf, built elements, operation) form a single unit in order to comply with the NFS 61-937 standard.

The fire-rated performance of a door unit is defined by its ability to resist fire for a certain amount of time. Testing yields classifications decided by certified laboratories and according to uniform protocols. The modern standard for the European Community allows for showing product performance in an identical fashion, referred to as the “EI” European ranking.

The letter “E” corresponds to the Fireproof rating.

The letter “I” represents Thermal insulation (still used in addition to an E rating).

These performances are expressed in minutes.

In accordance with French regulations established on March 14, 2011: doors that have EI1 ratings may be installed without any restrictions. An EI2 rating requires, the usage of M1 or B-s3 rated materials on the walls and surfaces adjacent to other doors, and d0 in a 100 mm zone extending from the outside of the fixed door portion.

We are very sensitive to the protection of your personal data. We do not use Google Analytics in order to keep control of the data you entrust to us. This data is therefore not transferred to the United States.
However, we do use some cookies to help us provide you with an optimized browsing experience.

You have the possibility to accept or refuse them.
Manage options Manage services Manage vendors Read more about these purposes
View preferences
{title} {title} {title}